Our friend JP, who died in February, specified in his will that his ashes be scattered on the summit of Great Whernside at sunset on Mid-Winter's Eve to join his late "animal", Dobbin Mk I, whose skull was interred up there many years ago.
As the date is now approaching today (27th October 2013) we went out to reccy the route and take some pictures so this is our report to give others an idea what they might be letting themselves in for.
With any luck the weather will be slightly kinder than it was today when we had gale force winds driving stinging rain into our faces.

Driving out of Kettlewell we took the Coverdale road which climbs steeply out of the village, then levels out for a mile or so before climbing again round hairpins on gradients as steep as you will find anywhere in the country. This is Park Rash, one of JP's renowned cycle challenges.

At the top of the climb just over a cattle grid the road runs onto open moorland where there is space to park ready for the ascent. 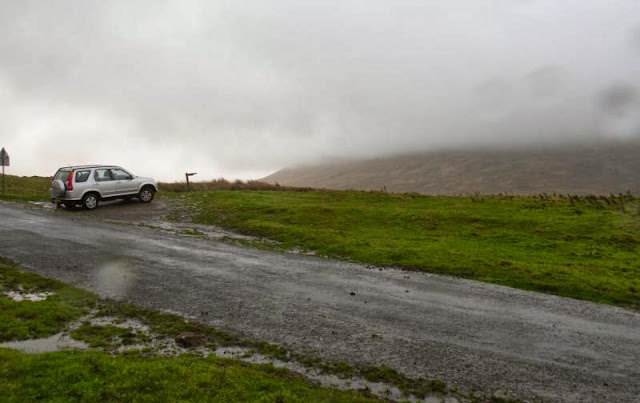 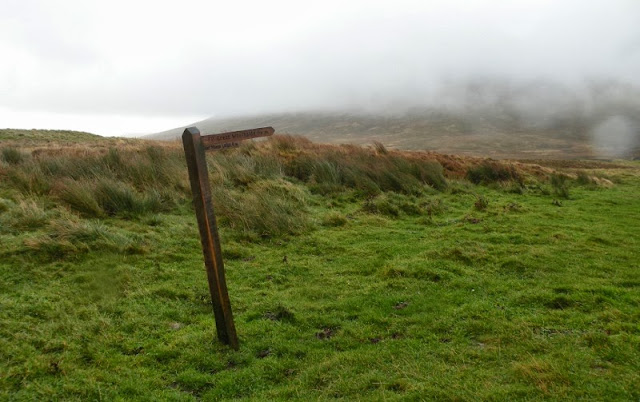 To start with the route is fairly level heading out across open moorland with some very frisky highland cattle following closely. 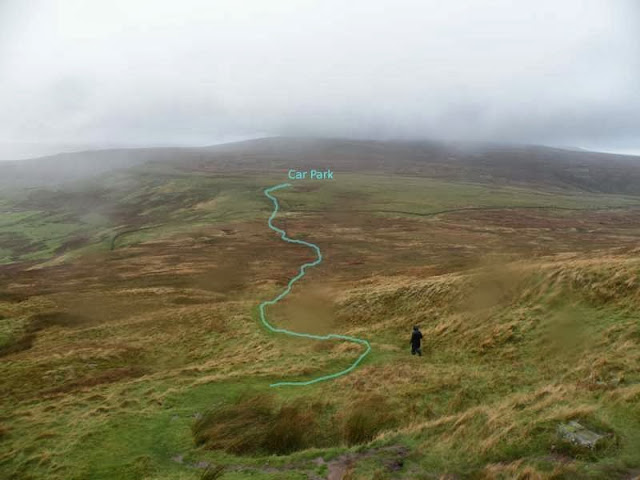 In places it's very boggy underfoot. 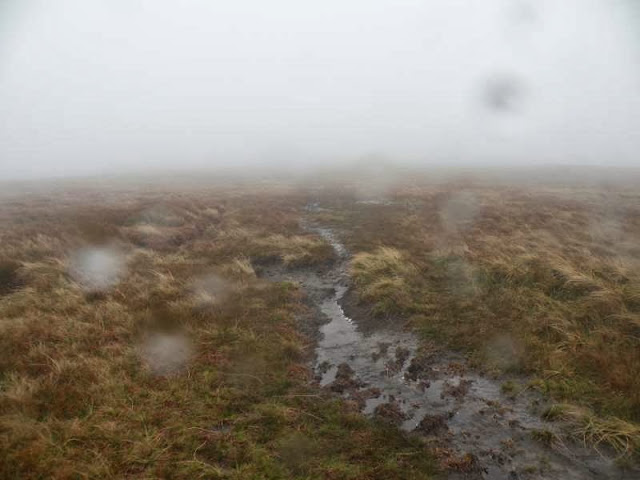 Then there's about 250m of ascent, steep and rough in places, to get to the broad (windswept) summit ridge. 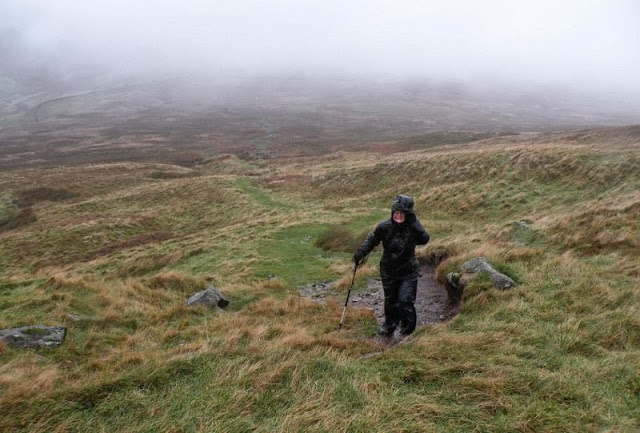 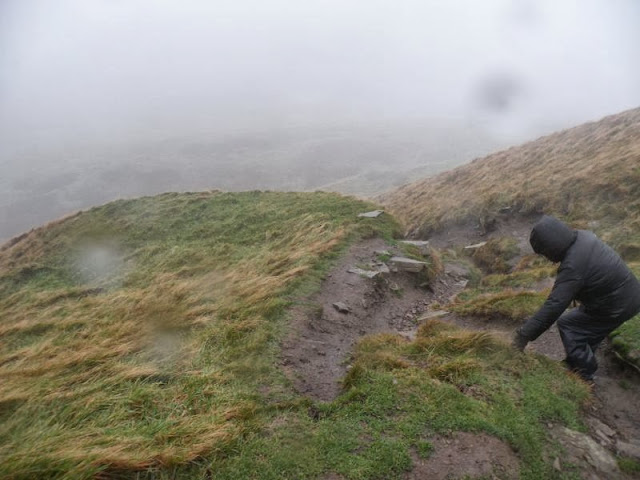 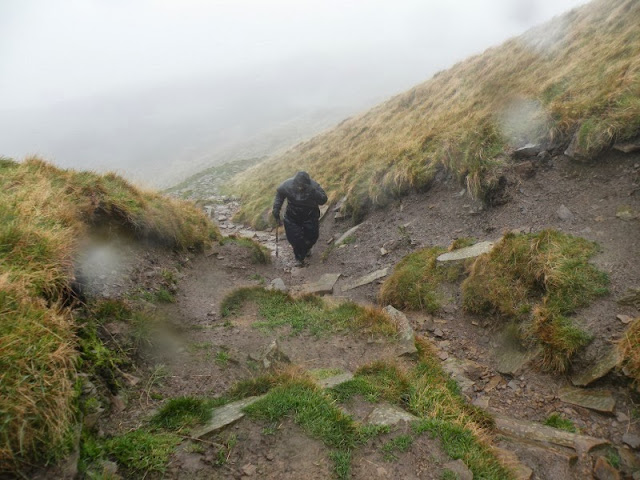 After gaining the ridge there's still the best part of a mile of fairly level but rough walking to the summit trig point. The wind today was so strong that we called it a day after getting to the ridge, turning back before the summit, but at least we were able to descend in daylight on this occasion. 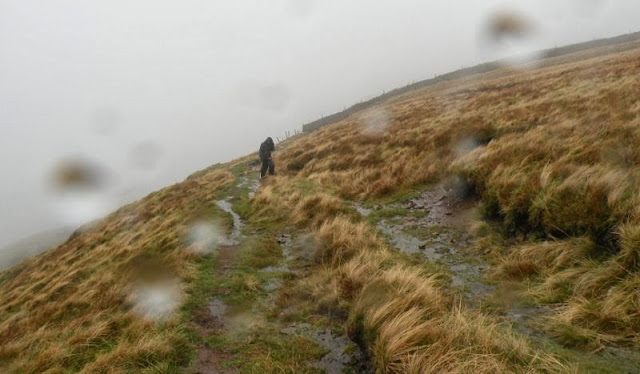 The weather was particularly foul today and chances are it won't be so bad on 21st December, though of course it could be worse, and descent in fading light or darkness will be interesting. If it is misty as well route finding will be challenging.

Essential kit is waterproof footwear with good tread, waterproof jacket with hood, hat, gloves, torch (preferably a headtorch), warm clothing (base layers and fleeces are good), daysack, waterproof overtrousers are strongly recommended and essential if the weather is as it was today. Trekking poles may be helpful. In wet weather jeans are not recommended.

The distance there and back is roughly three miles with about 300m (1000ft) of ascent, which may not sound like a lot, but this is a serious mountain walk at altitude. It's likely to take 1½ - 2 hours (ish) depending on the party. For the Mid-Winter's Eve expedition everything depends on the weather on the day. If it's clear and dry with light winds you'll wonder what all the fuss was about.

In gale force winds and driving rain or sleet in the dark and mist you'll know what the fuss was about....
﻿
Posted by Mike Benson at 10:52 No comments:

We measured our sunflowers today. The tallest was about 2.97m - not bad for over 1000 feet above sea leve. 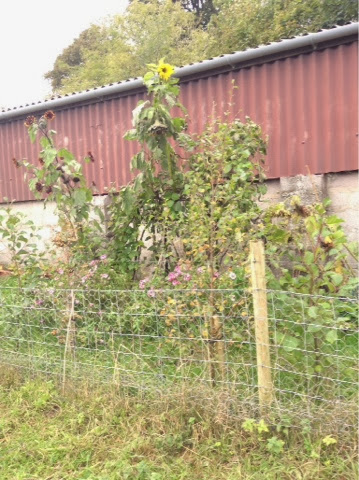 Now that some of the grass has been cut and the rest has died back a bit we have done a bit more fencing. Still got another 100m or so to do but I think we've broken the back of it now. We are trying to make the central area of the field, where there are no trees, stock proof then our next door farmer can let his sheep in to graze over winter. Then we'll let it grow through spring and summer again.
Rache asked advice from Colin Newlands of Natural England last week for how to deal with grasses and rushes in the former donkey field. He was quite taken with the site and has left her an assortment of wild flower seeds as well as some plug plants kindly donated by a research student from Manchester university. 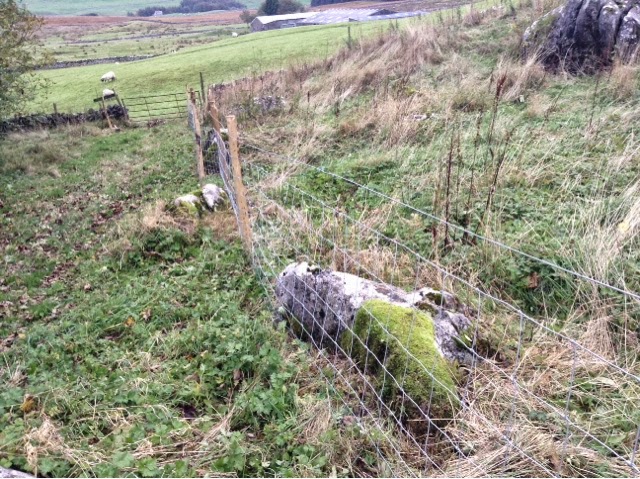 The trees have done well through the summer with most of them having taken And just a handful of duds. Some are now over 6ft from little more than twigs last December. We have been trying to manage them as best we can, applying roundup around the bases in spring then recently cutting back the grass around them as much as possible.
Still got a bit more strimming to do.....well, maybe quite a lot; some patches will be left this season. If anyone fancies a bit of nettle-pulling, hand-shearing around rocks, or strimming/scything, get in touch! 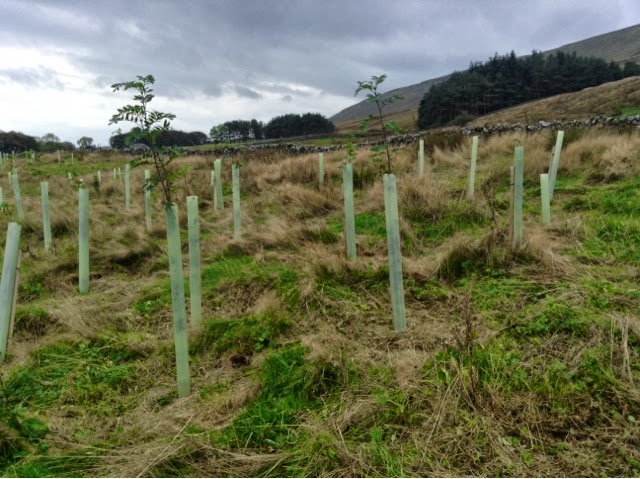 The field behind Broadrake, which was planted with 600 trees last December, had generated a prolific amount of grass by summer, somewhat more than the mower was capable of handling. So we have been trying to find a sensible way of dealing with it. Last autumn William, our neighbouring farmer, let his cattle in there to graze and they certainly managed to eat a fair bit. However we can't do the same this year since cattle and young trees don't mix. Because of all the rocks and rough ground William did not want to cut it so we needed a different solution.
Mike had a go with the scythe with results a bit like a bad haircut on the small area he managed to do. It clearly wasn't going to be realistic for the whole field.
Then through her flower walks in the National Nature Reserve across the valley Rache met Andrew Hinde of Natural England who reckoned he might be able to cut it with his power scythe if he could have the feed for his organically reared cattle. After a reccy he decided it was worth a go and turned up on August Bank Holiday Monday. The weather was as it should be but rarely is on Bank Holidays. There is a big area in the centre of the field that is free of trees, though not rocks or shakeholes, which he cut that morning and left us to turn it later that day.
He came to row it up the following day and because he was worried about the weather holding decided to bale on Wednesday, a bit sooner than he would have liked. The result was about 120 small bales which we covered up to protect them overnight in case of rain. Some were wrapped in tarpaulins, then we pitched out old tent and managed to stash 30 or so in there to the amusement of William and his family who came round to see what we were up to.


The bales were collected on Thursday to be laid out in Andrew's barn to dry out a bit more before being stored for winter feed. So the middle of our field now looks quite respectable and there is just all the grass growing amongst the trees left to deal with.... 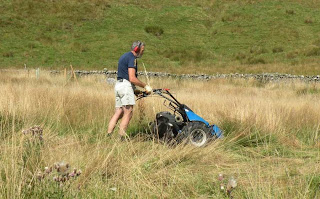 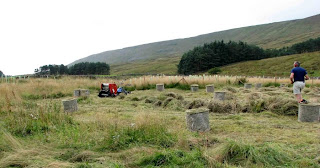 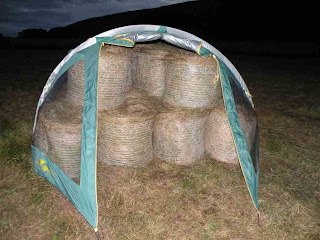 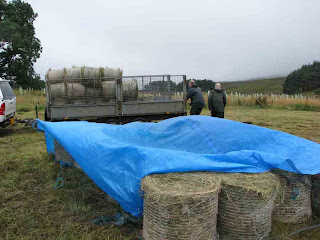 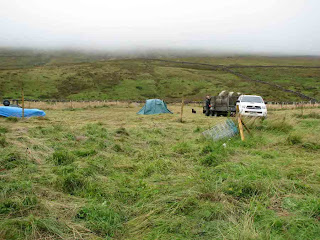 The sheep are just at that difficult age now and a couple of weeks ago they learnt they could climb over the wall at the front and into the garden. Rache spent a traumatic Friday trying unsuccessfully to keep them out so over the weekend we constructed sheep defences.

The willow we had cut back over the winter was put to good use to make an attractive and artistic barricade to keep them out. 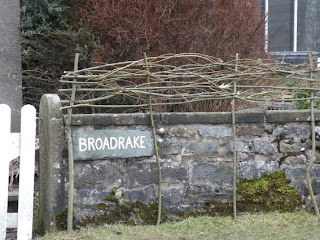 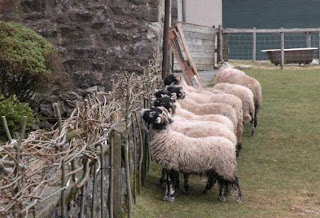 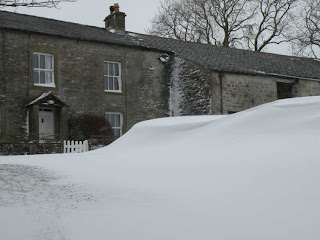 23rd March 2013 and I think we actually are cut off for the first time today. Deep drifts along our track and along Philpin Lane mean we can't get a car anywhere. It's blowing a gale with wild spindrift so we are going to stay put for the moment. If the wind dies down a bit we might see if we can make it to the Hill Inn later.

More pictures of the snow on the website.
Posted by Mike Benson at 05:33 No comments: