Root Vegetables and their Applications in Plumbing

Yesterday seemed like a good time to get more acquainted with our water supply on account of how since the previous evening it appeared we didn't have one. We are not on mains of course, but instead take water from a stream high up on Whernside which feeds a couple of header tanks.

So I climbed up to the lower tank to find it empty, then on to the smaller tank further up which was also empty. The feed for this is from a pipe in the stream slightly higher again so I went up to inspect that and clear the inlet.

It all looked positive at this point with the higher tank now filling rapidly.

While the lower tank was empty I took the opportunity to climb in and shovel out the silt that had built up over time, but water was still not getting through from the higher tank, barely a trickle from the inlet.

I managed to find William, the neighbouring farmer, who knows about these things since he helped install a lot of the supplies for the local farms many years ago and had helped out the previous occupants on one or two occasions. He suspected an airlock in the pipe between the two tanks as there is a bit of a rise between them after a small dip, so since the pipe had drained completely we would need to get the water over this to restore the flow.
One suggestion was to block up the inlet to the lower tank for a bit to let the pressure from the trickle build up, then release it to see if that would clear the airlock.

Which is where the vegetables come in....

We needed something to plug the pipe so took up a potato and a carrot which looked about the right size. The potato proved more effective and after two or three goes letting pressure build up for five minutes or so we finally got a good flow into the lower tank.

All appears to be well now. We have water again and both tanks are full to the brim.

There is a picture of the potato below clearly showing the indentations where it has been pushed into the end of the pipe. 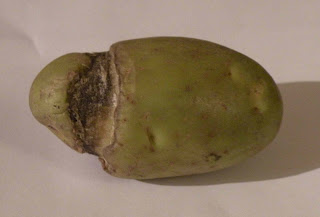 (Unfortunately no picture is available of the carrot, which has now been consumed in an Irish stew.)