Posted by Rachel Benson on June 10, 2020
Working around the site has been a saviour in these times - and the veggie plots have never looked so good. Mike has done marvels with upcycling old barn floorboards, digging out overgrown patches behind the house, and I've been in the greenhouse sowing seeds! 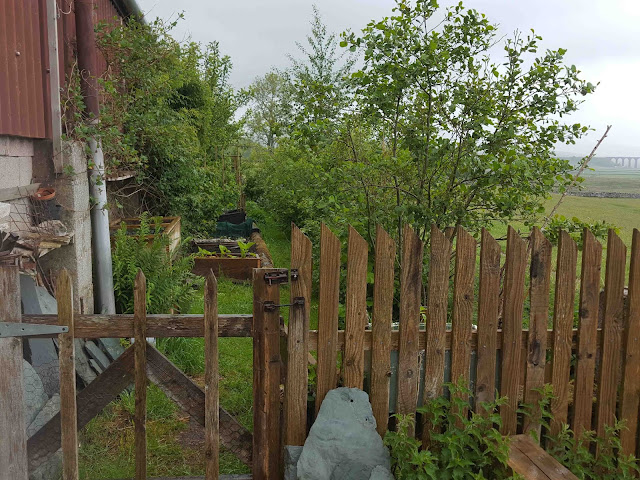 The veggie plot runs alongside the big modern barn with a young hedge that we try to keep short - the sun rises up and over the hedge so the plot is in full sun from early morning until late afternoon. The building warms up and retains the heat so it's a little micro-climate in there. 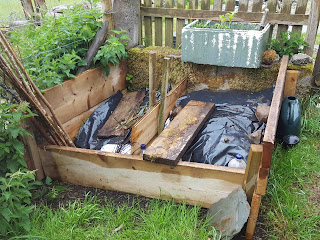 Mike's added new sides and dividing partition to the compost heap....I've got a courgette plant that I was hoping to plant out onto the top of the right half....but there are several snails lurking so maybe not..... 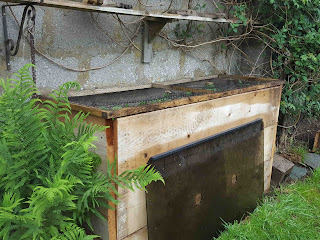 ...and more floorboards have made this enormous deep planter.
The bottom is filled with bits of logs & branches followed by a layer of sheeps wool dags and then some composted hay, horse manure, before spent compost and soil from deep beds behind house mixed with new peat free compost.
...a sort of 'hugelkultur' hot bed
It's not filled all the way up to allow growing space beneath the bird-proof netted frame. 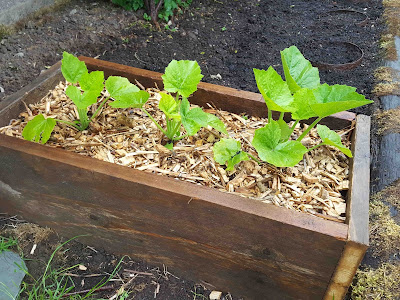 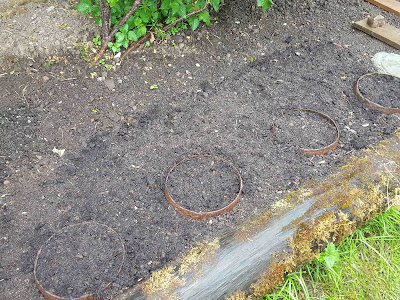 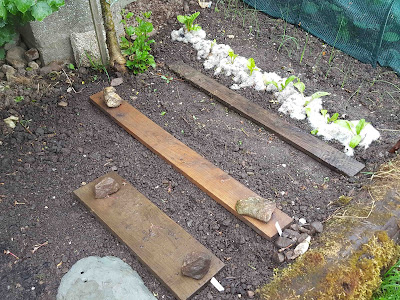 Radishes and spring onions just sown a couple of days ago...I like to plant inside the old wheel rims I found on site when we first came. Watch this space.... 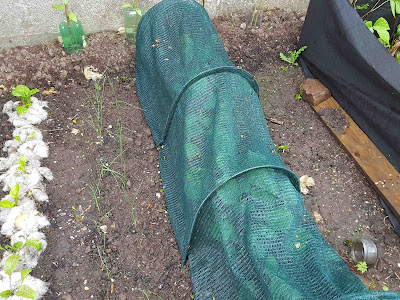 and next, a swap from a friend - 4 swiss chard plants and 4 rainbow beetroot wrapped up in sheeps' wool!
Under cover is red cabbage - I don't normally do brassicas but I love red cabbage and thought I'd give them a try.

Leeks in between are a tad small but they'll grow. 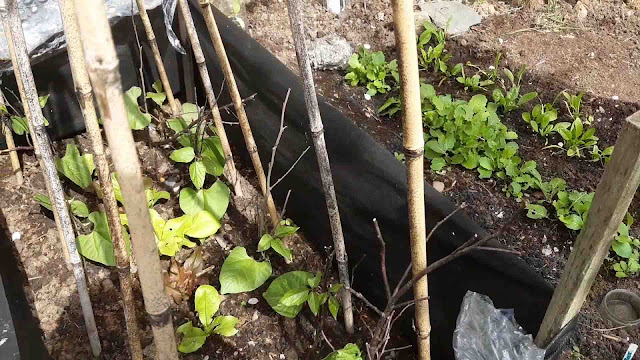 3.5 weeks later....runners twirling up the canes & sunflowers doing ok against the barn wall 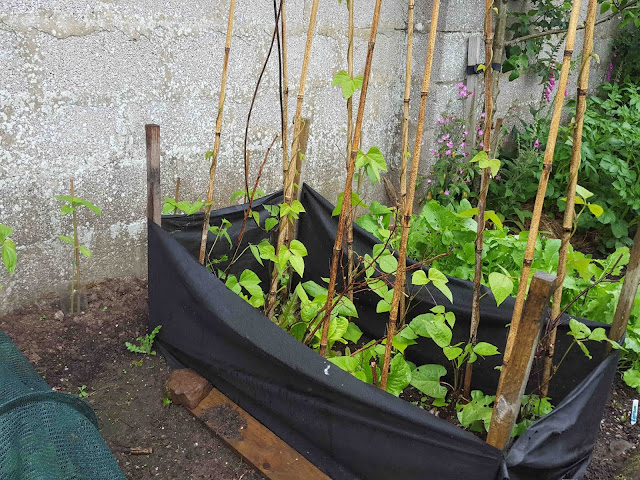 Hay compost protection for potatoes from sharp May frosts... onions and garlic in front.... 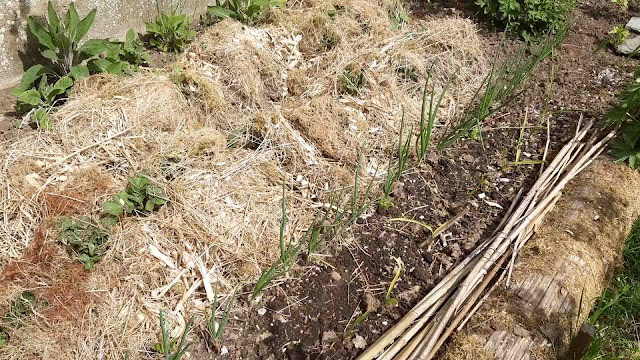 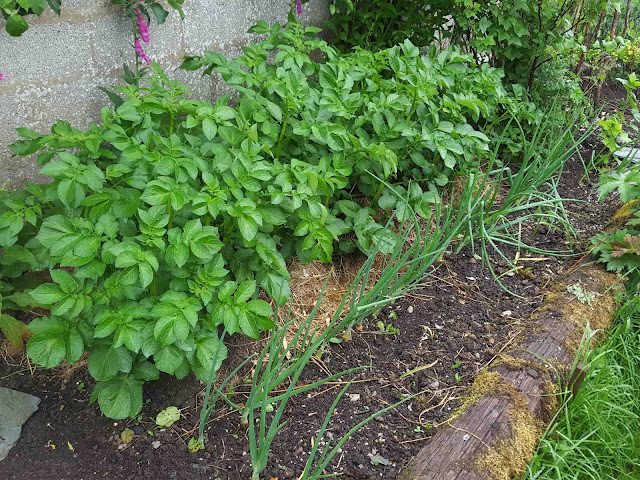 we'll be checking out the potatoes in another week or so....

I usually grow peas and beans into deep cardboard boxes lined with plastic or bubble wrap, with enough plastic to cover over the box during germination - it saves pfaffing with lots of separate pots, gives plenty of room to develop a good root system, and the plants break out fairly easily with a good root system. 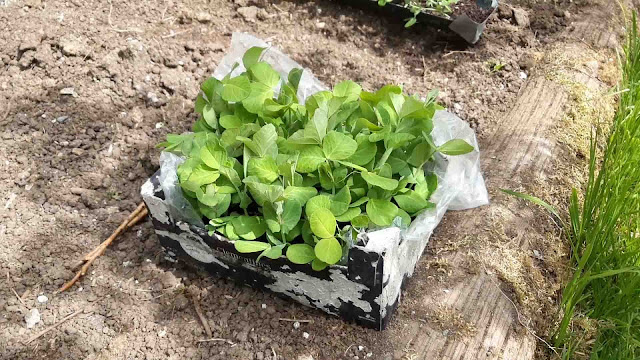 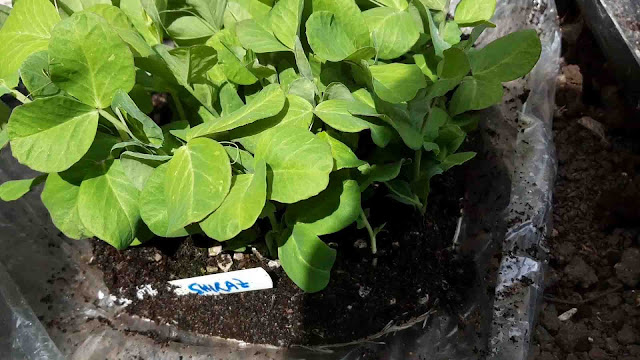 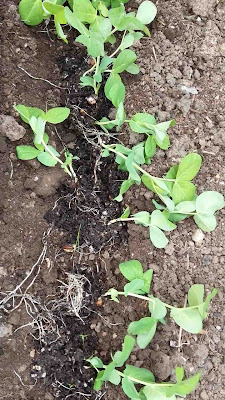 This year I thought I'd also try the Rachel de Thame method from Gardner's World and germinated a second sowing of peas into a piece of guttering.... 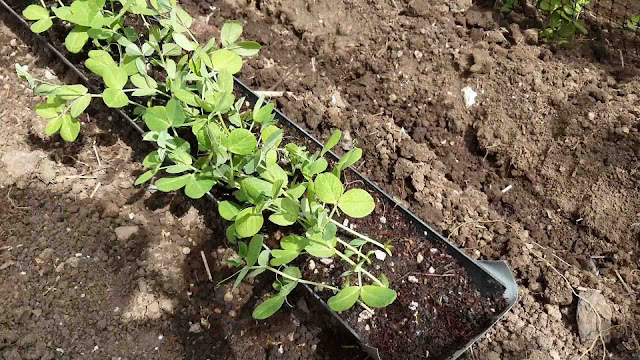 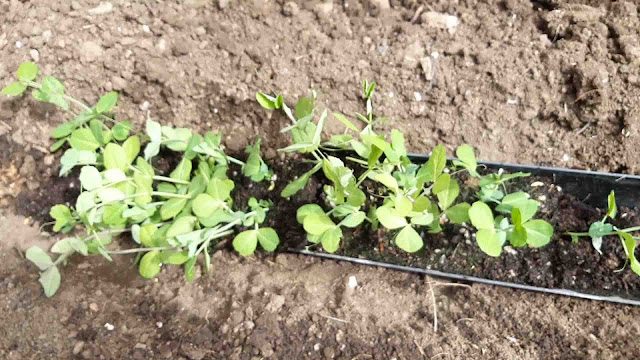 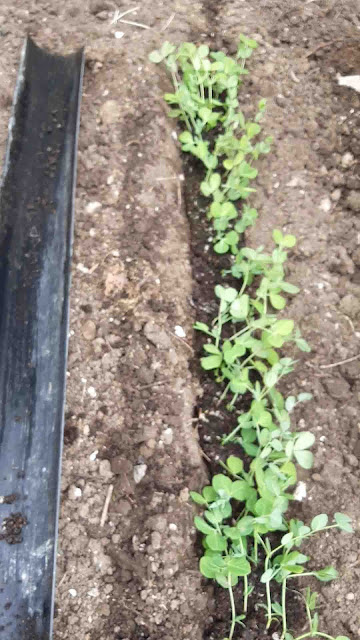 It worked really well and the plants did slide out with gentle persuasion into a
prepared trench.

Mike made a support out of old tree stakes... 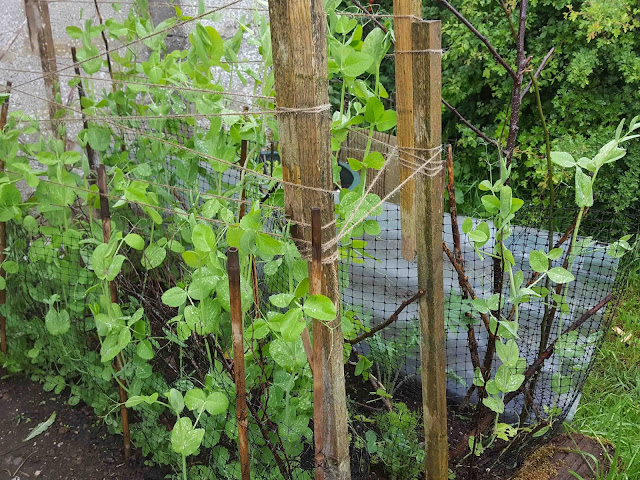 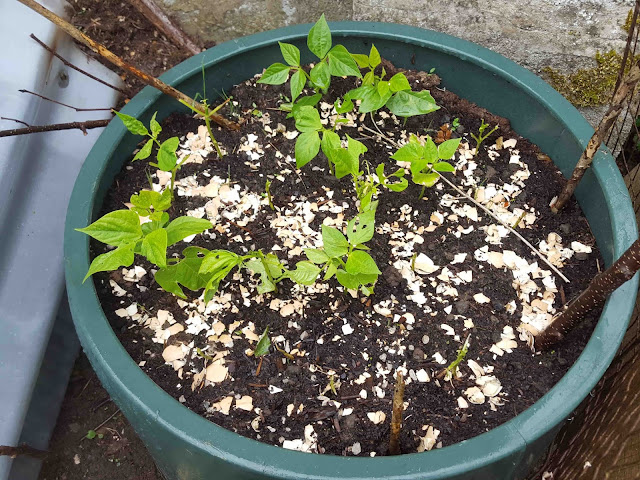 also lost one or two of the climbing French beans to snails too....with hindsight should have waited until another pair of leaves so they could be tied in out of harm's way
- will have to get the beer traps filled up tonight 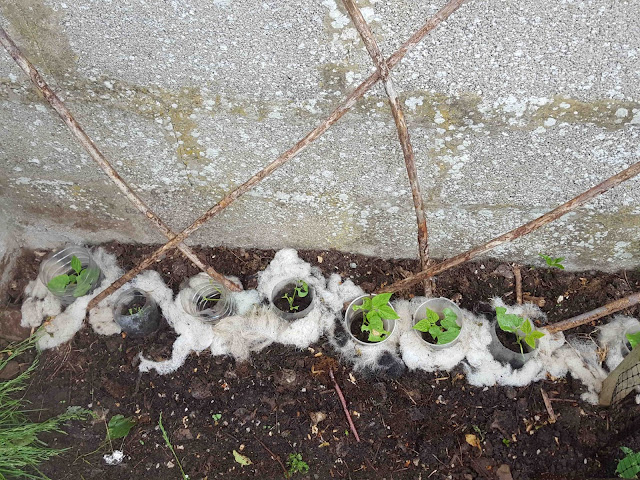 Back behind the farmhouse, Mike dug out the really overgrown tussocks and I've created a new herb garden - shaded for part of the day but should be fine. More herbs required.... 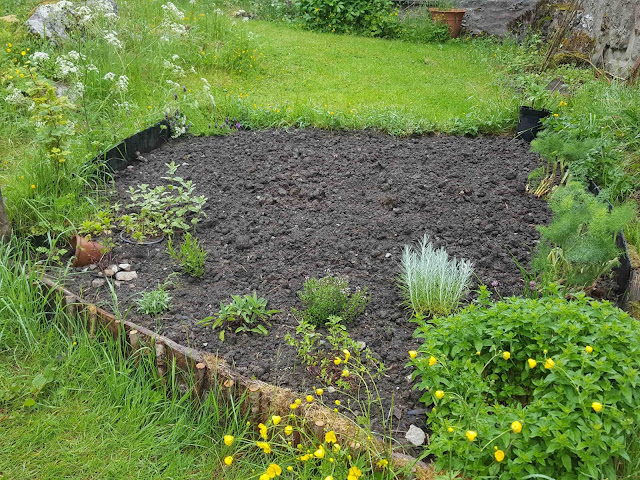 At the top of this area, we've added edging with old telegraph poles. I've planted some asparagus crowns in 2 trenches heaped over with lettuce in between, more french beans, beetroot and another sowing of carrots under the board. Note the fallen sheeps' wool gleaned from the meadow to help prevent slugs....so far so good...but there is a helpful nearby frog... 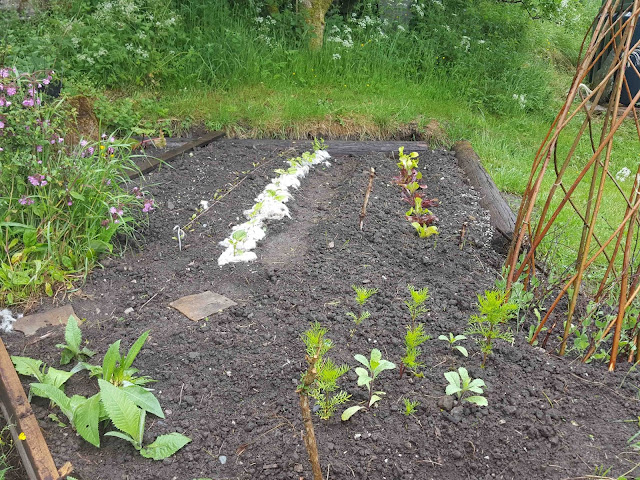 ...and a few days ago, the first asparagus shoots appearing....we won't be harvesting this year! They arrived very late and didn't go in until mid May so I'm hoping they'll be fine. 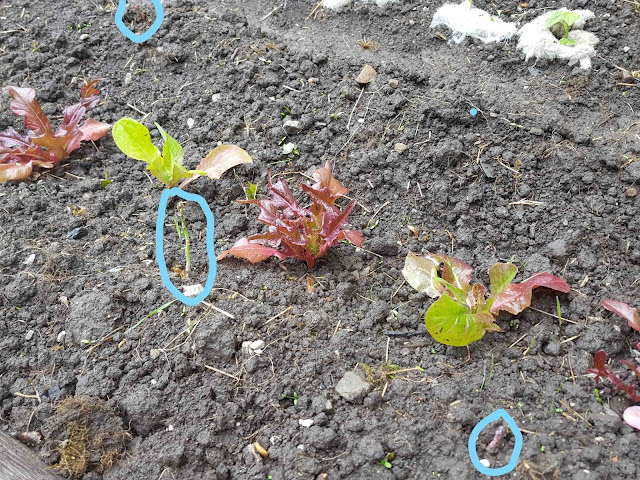 and finally, more shelving in the greenhouse with shelves that can be removed as the tomatoes grow...and still there's plenty of wood left! 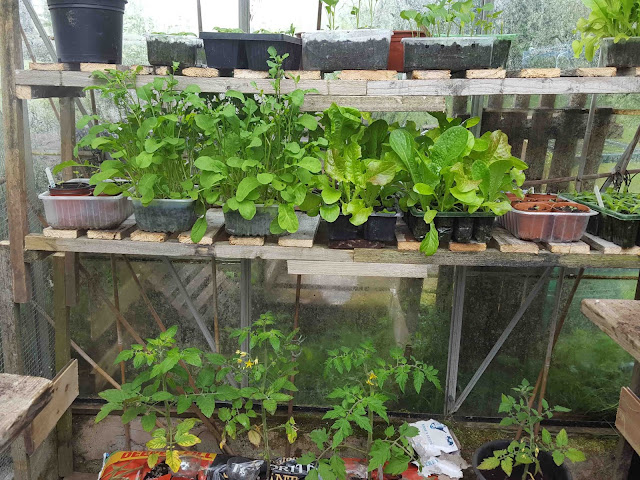 So quite pleased so far with this year - previously I've had Peter Rabbit visiting, plus other rodents of various sizes which has been very depressing; Tom and Jerry have certainly helped the situation no end.
Hope all your veggie patches are going well - my sister-in-law has had to put up badger fences!!

Sorry for the delay and length of blog  - it does take time and I've been waiting for a day when I was rained off. I'll make sure the next one isn't so far away... 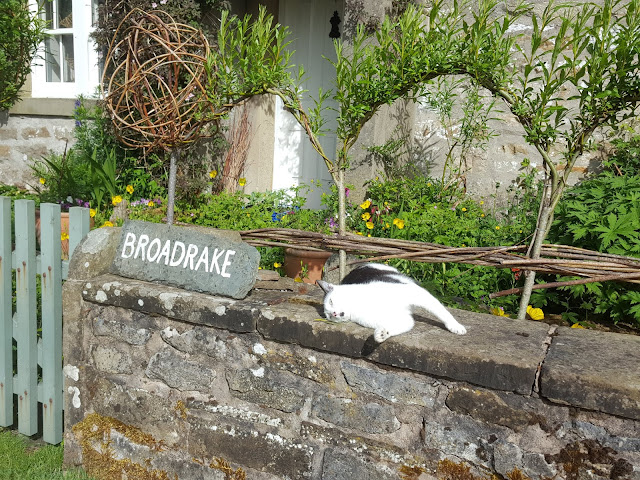 Been meaning to get back to updating the blog from time to time - the last post was before we opened way back in June 2016! Suffice to say the business has been very successful and we had our best booking calendar ahead of us back in March right through until Sept....:( The lock down was going to have been a perfect time to restart the blog to update you not only on the bunkbarn and workshops but also with the things we've done around the site too....but it's only happening now after 8 weeks!  We've been really busy, not only with making the most of the great weather to improve many things around the garden and veggie patch, sewing scrubs as well as being asked to put together an online video tutorial for our local Stories in Stone HLF project - it it was only finished last week - more about that later!   So, rather than make this post long....it's just to say 'Welcome Back' Here are a couple of recent images of the house and barn - and if you've n 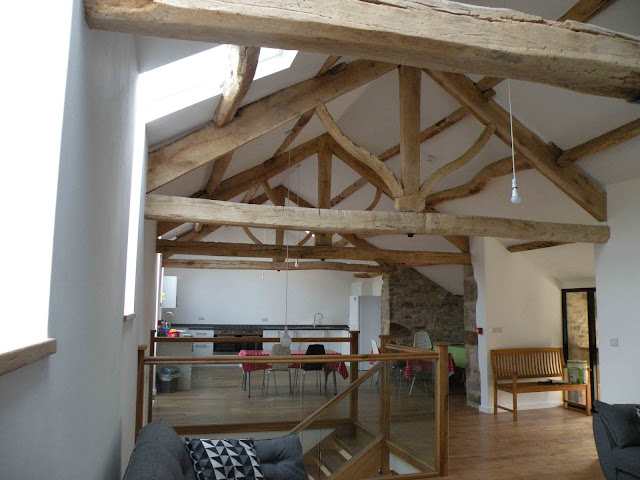 Time for some upstairs pics since it's pretty much complete up here now apart from last top coats on the doors in the corner which are hidden from view.... and Mike managed to take a pic in the short time we had without sheep so no barriers  before the lovely lambs came back - wibbley wobbley new Swaledales....very cute...apologies for the poor quality - from mobile After all the endless layers of paint on the wash room doors - I turned to the tiling.....starting with the easy bits first.... Dusty lent me his tile cutter for the fiddley bits required between the door frames...it worked!! Thank goodness there were only 2 to cut like this ....and one sore cut grouting finger later - the finished effect! and after all that white and grey, a shot of Ingleborough in the warm evening sunshine A short break for me with the Ingleton Twinning group until 11th May - meanwhile Mike went cycling for one day and wore his knees out, then came